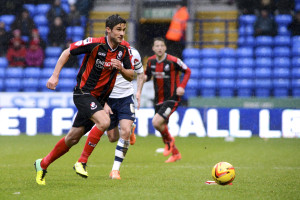 Andrew Surman is urging his current team to look up the table ©AFCBPICS.CO.UK

Ex-Southampton midfielder Andrew Surman says now is a great time to be at the club that schooled him.

South African midfielder Surman came through the ranks at Southampton’s prestigious academy which has flourished the likes of Theo Walcott and Gareth Bale in recent years, as well as latest England international, 18-year-old Luke Shaw.

Contracted to another Premier League side, Norwich City, the midfielder is enjoying a second loan spell with AFC Bournemouth in the second-tier.

“It is a great time to be at Southampton and looking at the players there that are tipped for England – it is fantastic,” said the 27-year-old.

“They have a good structure at the club and they have had some managers that will give young players a chance.

“You see a lot of clubs with good youngsters but they just hit the roof and will not go any further because they spend millions of pounds on players from abroad.

“I enjoyed my youthful years, coming through Southampton I had lots of ups and downs – it’s great to see young players coming through and I’m sure lots of clubs are looking at trying to copy that model.

“The amount of players they have brought through over the years is astounding.”

Surman still harbours Premier League hopes of his own and has a year left of his contract with his parent club, and he says the summer holds the key to his future.

“When it gets to the summer I have a few decisions to make. Until the end of the season my concentration is here at Bournemouth,” he said.

Surman has become a regular name on Eddie Howe’s team-sheet at the Cherries after initially struggling to nail down a place, but Surman says nobody’s spot is guaranteed.

“You are not guaranteed your place here and there is a lot of competition for places - I would not consider myself a regular at the moment,” said Surman.

“Things were not quite working out at Norwich, I was injured quite a lot last season and I knew I was going to be going out on-loan and I like the style of football here.

“There is a different personnel and manager but there’s a new lease of life since the manager has come back. There is a huge belief in the club as well now and some really good players.

“I think at the start of the season we were on the end of a couple of bad results, a 5-1 and then a 6-1 and we have since steadied our feet after that, picking up some good points and good wins.

“Our performances have been good and we’ve played sides up there recently - Leicester, Derby and Burnley who are all in the top three.

“It is better to look up rather than down because that can create a bit of a nervous atmosphere,” he added.