American Hustle is another instant hit from director David O. Russell. It is based on a real-life story, but does not cling to the truth – as the intro says, ‘Some of this actually happened’. 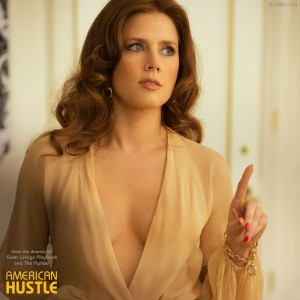 The story focuses on conman Irving Rosenfeld and his partner Sydney Prosser, played fantastically by an almost-unrecognisable Christian Bale and the talented Amy Adams. Their life is imperfect though, since Rosenfeld is still married to his younger, unstable wife Rosalyn (Jennifer Lawrence), with whom he has a son. Things get worse when FBI agent Richie DiMaso (Bradley Cooper, whose hairstyle is second only to Bale’s), desperate for recognition, traps the criminal couple into working for him.

The unlikely trio hurtle along with their crazy scheme, as things get ever more complicated, with targets spreading from a mayor from New Jersey (Jeremey Renner) to a renowned crime boss (Robert de Niro). Nothing is certain, no one is really in control, and no one can be trusted. Richie and Irving might think they’re playing each other, but Rosalyn and Sydney have their own ideas.

The film is set firmly within the 1970′s, a fact made abundantly clear by the outrageous fashion choices. Bale’s comb-over is indeed ‘elaborate’, and Adams wears more plunging necklines than you can count. American Hustle may not be edge-of-your-seat viewing, but it’s certainly unpredictable.

It was nominated for seven Golden Globes and won three, was nominated for ten BAFTA’s, and shows no signs of stopping. If anything, awards should be created specifically for the outstanding hairstyles, and the genius dialogue, with the best line describing Jennifer Lawrence’s character as ‘the Picasso of passive-aggressive karate’.

You are never quite certain of who is sane and who is not, with everyone teetering on the edge of obsession, and no one sure of who is playing who. The cast are all equally impressive, although perhaps Christian Bale deserves a special mention. The British public are all too used to over-the-top fake British accents within films, but Amy Adams carries it off perfectly as her alias, Lady Edith. American Hustle is a very clever film, and hopefully a standard we can expect again from David O. Russell.