Andrew Garfield shines in the second instalment of The Amazing Spider-Man. 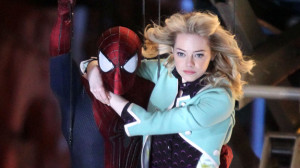 The Amazing Spider-Man 2 is Andrew Garfield’s second foray into the role of Peter Parker, the man behind Spider-Man. Emma Stone returns as love interest Gwen Stacy, but their relationship is on the rocks: Peter can’t forget the promise he made to Gwen’s dying father, and Gwen wants to move on with her life, to new opportunities.

Jamie Foxx plays primary antagonist Max, later ‘Electro’. Max is a downtrodden, world-weary employee of Oscorp Industries, who idolises Spider-Man. After an accident leaves him developing new abilities of his own, he turns on his former hero and demands that the world finally notices him.

Dane DeHaan appears as Peter’s old friend Harry Osborn, heir to Oscorp and struggling with demons of his own. Not enough screen time is dedicated to their friendship, and a little too much is given over to lengthy fight scenes and sweeping CGI shots, and you won’t see much of the Green Goblin - but he packs a punch when he does appear.

Cheeky references abound – spot the old Spider-Man theme tune, appearances from comic-book villains, and even an ‘Incy Wincy Spider’ rendition breaking a tense moment. Garfield plays Spider-Man as a witty crime-fighter in the Tony Stark/Iron Man vein of superheroes, cracking jokes to confused criminals and keeping the film from venturing into the darkness of Batman.

Sally Field returns as overburdened Aunt May, trying to deal with a mischievous Peter without Uncle Ben, while new cast members include Paul Giamatti in a refreshing departure from his usual roles, and Chris Cooper as Norman Osborn. Unfortunately the film dwells a bit much on the fights and not enough on the relationships, dragging out action shots and overusing visual effects, with a protracted running time of almost two and a half hours.

The film is part action, part rom-com, part coming-of-age tale, but it balances well. Don’t expect an all-action blow-out, because the film isn’t afraid to tug on your heartstrings – Peter is making revelations about his parents, struggling with growing antagonism towards Spider-Man, and, of course, desperately trying not to lose Gwen. Unlike many other superhero sequels, it measures up to the first film, and has some unexpected twists to keep you interested.