Alan Carr came to the small seaside town of Lyme Regis on 7th March with his Work In Progress tour. The channel 4 star played an intimate gig to an excited crowd, with the help of his support act Angela Barnes.

The night sold out within minutes although this is no massive triumph, as the theatre is very small, but it’s nice to see that even some BAFTA winners don’t get too big for their boots.

The two comedians complemented each other well, with BBC New Comedy Awards winner, Barnes narrating anecdotes about her unsuccessful sex life and Carr cracking jokes about aimed towards online dating. 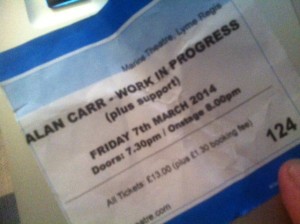 Barnes focused her act on mocking her personal life and comparing differences from the courting ritual now and when that of when she was younger. If a single 37 year old talking about the pains of her life is what you find funny then this comedian would suit you perfectly, although this route can sometimes be overdone.

Whereas Carr had a varied set with jokes about onsies, which then moved on to a story about the dilemmas of taking his mum on a safari. He reacted well to crowd heckling and had constant banter with a self proclaimed ‘only gay in the village’ which made a funny evening for everyone in the auditorium.

Although it was named Work In Progress because that is essentially what it is, and this was obvious by the end of the performance when he forgot a few of his jokes and became flustered.

However the rest of the evening seemed to be a success with the intimate crowd, one of whom even asked if the star would go for a drink with her in the local.