Smith: I had to leave Tottenham for games 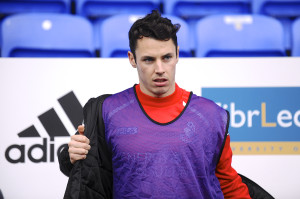 Adam Smith is hopeful that his football with the Cherries will show a more settled character ©AFCBPICS.CO.UK

Adam Smith says he was forced to leave Tottenham in order to escape from the shadow of England full-back Kyle Walker.

Smith was touted to have a big future and was a regular feature for the England U21 squads while he remained eligible.

The defender is in his second spell on the south coast, although he is yet to dislodge first-choice right-back Simon Francis from the starting eleven.

“I have been here before so I am beginning to settle down now and I already know the club and town,” he said.

“I am enjoying it. I was on loan and I have some good memories from here.

“I still had two-and-a-half-years at Tottenham on my contract but I wanted to get out and play as many games as possible, still as a young player.

“It would have been easy to stay there but I didn’t want to just do that.

“You have less chance of getting into the first team at a club like Tottenham and that was another reason that helped make my decision here.

“Tottenham have a lot of money to buy whoever they want.

“I had Kyle Walker in front of me and as a young English player, that made it even harder for me.”

Smith says that Walker helped nurture his development along the way, as did multiple loan spells away from the club, including stints more recently at Derby and Millwall.

“He is a good player, an England player and it is difficult to get ahead of him in the pecking order as he’s a first-choice England international but I learnt a lot off him,” he said.

“I grew up with a lot of lads there, including Danny Rose and Ryan Mason who I still keep in good touch with.

“I have had seven or eight loans like Danny [Rose] and Andros [Townsend] but they are a bit ahead of me in the chances they have been given.

“Kyle is only a year older than me so it was hard for me, so I wanted to leave and have the control over my own career.

“When you are still young, you need to play games and obviously I have ambitions to play in the Premier League and England – it’s just going to take longer to do that.”

“I have not had much match fitness. I need to be patient and keep playing well. Franno has done well so for now, it is just about waiting for an opportunity.”

Smith has sacrificed the bright lights of Europa League football and a top four challenge in search of regular playing time and the defender insists he doesn’t have a problem with making the swap.

“I am not at all envious, I obviously speak to the lads there but it’s nice to see them get that win [versus Dnipro],” he said.

“I know I can settle down and not live out the back of a car anymore. Hopefully my football will reflect how settled I become.

“The Championship is pretty crazy but hopefully we can pick up some wins in March, which will be massive for us, with a lot of games fitted into one month,” he added.