A Million Ways to Die in the West Review 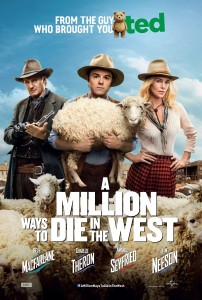 A Million Ways to Die in the West is left sheepish as the talented cast are luring its audience into boredom.

A Million Ways to Die in the West offers very few funny moments and is only impressive by the talented actors casted.

After cowardly sheep farmer Albert (Seth MacFarlane) backs out of a gunfight, his girlfriend (Amanda Seyfried) leaves him for another man, Foy (Neil Patrick Harris). When a mysterious woman, Anna (Charlize Theron), rides into town, his life beings to change and she helps him find his courage. But when her husband, Clinch (Liam Neeson), the farmer must put his newfound courage to the test.

Seth MacFarlane directs, produces, co-writes and stars the main role of this film. Maybe he is putting too much on his plate as this film falls flat and is left feeling sheepish. Despite all the marvellous costumes, stunt work and the location, this big-budget western spoof is too superficial to live up to its expectation.

The talented cast is terrific. With Liam Neeson, Charlize Theron, Amanda Seyfried and so on billed to cast, the potential for the film grew higher. But sadly the script and action is luring the audience to boredom.

With the success of Family Guy (1999-present) and Ted (2012), this was expected to be a hit, but it can be seen that this film’s humour touches a more personal nerve. Maybe he needs to stick to what he knows best, being an extremely talented voice actor.

The highlight of this film is the Back to the Future Part III (1990) reference.

A Million Ways to Die in the West is a dull spoof with a great western location. It is more horror than comedy, especially with these violent deaths and getting killed by ice, can leave quite a chill.