Kenny Swain has been in charge of the England Under-16’s since 2004 and has seen some of the best English talents develop first hand. 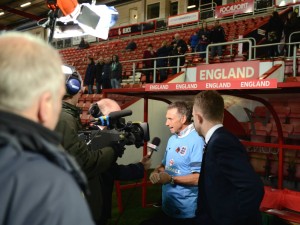 The England boss has watched the likes of Jack Wilshere, Andros Townsend and Ross Barkley flourish as 15-year-old boys. Swain’s youngsters played against Northern Ireland at the Goldsands Stadium, Bournemouth, in the Sky Sports Victory Shield – a competition they have won for the past eleven years.
Swain, a former player himself, said that some of this crop of England stars will come through and represent the senior side one day too, emulating the journey made by current international Wayne Rooney.
“Without a doubt there will be one or two coming from this group and one or two also coming from the last group,” he said.
“I am pretty confident over the way, in the last five years in particular, we have developed and they will be coming through in the not too distant future.”
Swain enjoyed a fine playing career, playing for sides such as Chelsea and Aston Villa, making an appearance in the European Cup final for the latter against Bayern Munich.
He says players such as Everton’s latest star Ross Barkley, were a delight to work with.
“It is a privilege and a pleasure,” he said. “Nobody expects players at this particular age to be consistent and performances to be as expected. If you are going to be working with young talented players, we have to be prepared to go along with the ride.
“It has been a wonderful platform and a start for all the players playing for a lot of the Under-21s and senior level at the moment. This competition will still firmly be in our calendar and we particularly love the event for what it achieves for us.”
England suffered a minor blow in their hopes to land the Shield for a twelfth time and will now face Scotland later this month – having already beaten Wales prior to their fixture in Bournemouth – hoping to secure another trophy for the cabinet.
Swain reckons now could be the time for their competitors to seize their moment, while they are on the top of their game.
He said: “In recent years the Welsh have done very well, Scotland have picked up and maybe this is the start for Northern Ireland.
“We think our pool of talent is growing, but I’m sure ourselves and other countries believe we may be a little bit short.
“I think high talent is always in short supply, whether it is in Brazil, or on these shores.”

Swain spoke after watching his side lose out to a Shea Conaty goal, a goal that condemned Swain to only his eleventh defeat as manager of the Under-16s in nine years.
“We were a little naïve,” he said. “It is a very young side, with some 15-year-old boys in there. Considering we had a couple of young ones, I did not expect it to flow, however there are a lot of lessons to learn.
“I thought overall the Irish deserved the victory. But it’s all part of the ride and I’ll be here with the players for the next part of it.”
Swain added his delight at bringing his latest generation of star players to the South Coast, where they received five-star treatment.
“It is fantastic,” he added, referencing to the 2,810 healthy crowd that turned out at the Goldsands.
“I would love to come back here with any team. It is a fabulous stadium and a great atmosphere. I felt the warmth of the area in particular tonight.”