A brutal but brilliant look into slavery. No wonder it won the  Golden Globe for Best Drama Motion Picture

12 Years a Slave is a powerful drama directed by Steve McQueen. His bold direction and a brilliant cast portray the brutal honesty of slavery in the 19th century. 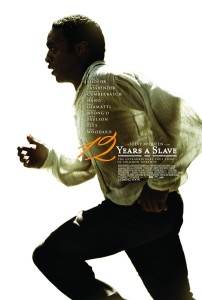 It’s 1841 and a free and gifted violinist, Solomon Northup (Chiwetel Ejiofor) and his family are living in Saratoga. He is lured to Washington D.C. by two entertainers promising work. Yet after a night of luxurious dining, Northup wakes up in chains and is sold into a life of slavery.

Steve McQueen can do no wrong. 12 Years a Slave is his third film following the Michael Fassbender-centred Hunger (2008) and Shame (2011) and the fact that he is an artist-turned-director is obvious in his work.

The actors are phenomenal and well-casted: Chiwetel Ejiofor is breathtaking, Lupita Nyong’o is a rising star, Michael Fassbender is brutal but brilliant and Brad Pitt is a kind soul.

This true story is emotional beyond belief, as the barbaric inhumanity that went on in the 1800s is hard to watch. Freeman (Paul Giamatti) trading naked slaves at an indoor market and Edwin Epps (Fassbender) whipping his slaves 100-150 times when they haven’t collected enough cotton, for example. However, every moment is essential and unforgettable. McQueen keeps the audience connected by staring this historic time in the face.

It is no wonder why this film is in the running for many awards and after winning Best Drama Motion Picture at the Golden Globes, it proves that this film has the potential. However, this is not the only reason why you need to watch it.

In years to come, 12 Years a Slave will be seen as one of the classics and it’s worth a watch even if just for the talented actors, as they are the soul of the piece.